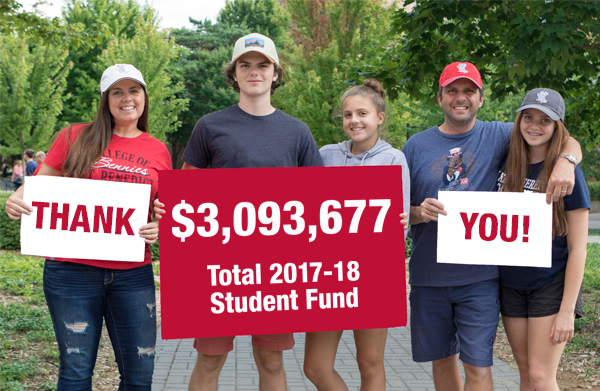 Saint John’s University raised $3,093,677 for the 2017-18 Student Fund, the largest in school history. The year was the first time donors gave $3 million for current scholarships for undergraduate students at the College of Arts and Sciences. It was also the first time in recent memory SJU achieved its Student Fund goal early, exceeding $3 million on June 28.

“I want to thank the thousands of parents, friends and alumni who contributed to the Student Fund,” said Brian Kelly ’99, president of the Saint John's Alumni Association in 2017-18. “This year was our biggest and most successful year ever, which is a testament to how much people love Saint John’s and want to help current students.”

“Volunteers made this effort successful,” said Kelly. “Because of their contributions of time to reach to their peers on behalf of Saint John’s, students will be able to access Saint John’s for another year.”

“I especially want to recognize the alumni classes who led in participation, donors, dollars and Fellows,” Kelly said.

Alumni classes celebrating Reunion 2018 (the 5th through the 60th reunions) contributed $548,369 toward the Student Fund, from 823 donors.

The Class of 1958, which celebrated its 60th reunion, had a 53% participation rate – the highest of all reunion classes.

The Class of 1968, in its 50th reunion, had the largest increase in donors over the previous year, with 58 new donors.

The Class of 1981 had the most Fellows Society donors, with 26 classmates giving $1,000 or more to the Student Fund.

The Alumni Association Board of Directors had a 100% participation rate in the Student Fund for the seventh consecutive year. Together the 43 members of the board contributed $48,311 in Student Fund support.