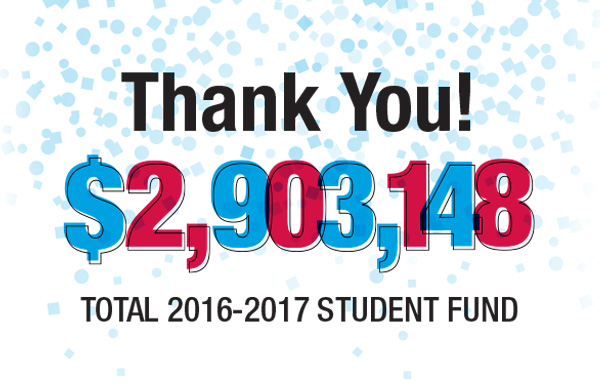 "It’s a great feeling to hit your number. It’s even better when you break a record. Saint John’s donors broke records this year, and the big winners were the students," said Mike Erpenbach '80, president of the Saint John's Alumni Association in 2016-17.

"I’d like to personally thank the hundreds of class volunteers whose outreach made this success possible,” Erpenbach said. “Because of their efforts, we can make sure that Saint John’s is accessible for today’s students just like the monks made it accessible for us.”

“In particular, I’d like to recognize the classes who led in participation, donors, dollars and Fellows,” Erpenbach said.

The Class of 1967, which celebrated its 50th reunion, had a 40% participation rate – the highest of all reunion classes. In addition to its $32,983 in Student Fund support, the Class of 1967 gave further gifts and future commitments, for a total 50th reunion class gift of $649,892. This includes $345,150 to establish the Class of 1967 Endowed Scholarship for students at Saint John’s. At the Reunion Rally, the class presented a cumulative lifetime giving total to date of over $5.4 million.

The Class of 1997, in its 15th reunion, had the largest increase in donors over the previous year, with 15 new donors.

The Alumni Association Board of Directors had a 100% participation rate in the Student Fund for the sixth consecutive year. The 42-member board gave $39,490 to the Student Fund.

The University’s Board of Trustees also had 100% participation. Together the 30 members of the board contributed $203,181 in Student Fund support.