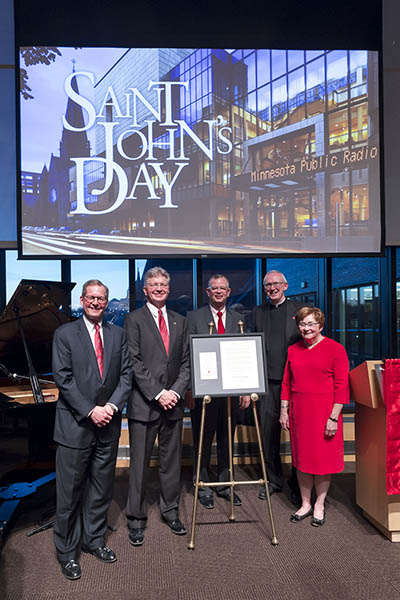 The citation reads as follows:

The Colman J. Barry Award For Distinguished Contributions to Religion and Society

In celebration of the 50th anniversary of a pioneering broadcast concept that has grown from its modest Collegeville roots to become a national treasure, we honor you, Minnesota Public Radio, for extending your commitment to your listeners and to that vision from coast to coast.

The entity that began on January 22, 1967, as KSJR-FM is now a 45-station organization that blankets Minnesota and has grown into one of America’s premier public radio networks. Every week, 20 million listeners tune in on Minnesota Public Radio’s national programming division, American Public Media.

Part of that success stems from the vision of Fr. Colman, Saint John’s president from 1964 to 1971 and a tireless advocate for extending the Benedictine message and values into the broader community. Another prominent part of Minnesota Public Radio’s evolution is attributable to the energy, leadership and passion of Bill Kling, a 1964 Saint John’s graduate who became the architect of Fr. Colman’s vision.

Thanks to their efforts, and the efforts of so many others during the ensuing five decades, Minnesota Public Radio has grown into something greater and more essential than even Fr. Colman could have imagined. It has blossomed into an unimpeachable source for news, information and unbiased journalism, as well as a source of music and entertainment through “A Prairie Home Companion” and other rich, diverse programming.

The honesty and integrity of Minnesota Public Radio’s contributions have made the network essential to the lives of countless listeners. Serving the public interest is the most Benedictine of values, and Minnesota Public Radio does so in a manner true to the vision of this award’s namesake.

Saint John’s has been both an impetus for and a beneficiary of Minnesota Public Radio’s outstanding work, and our community is greater because of our relationship with the network. We honor you today as once again we celebrate 50 years of visionary growth.

Read The Record story on MPR's visit to SJU