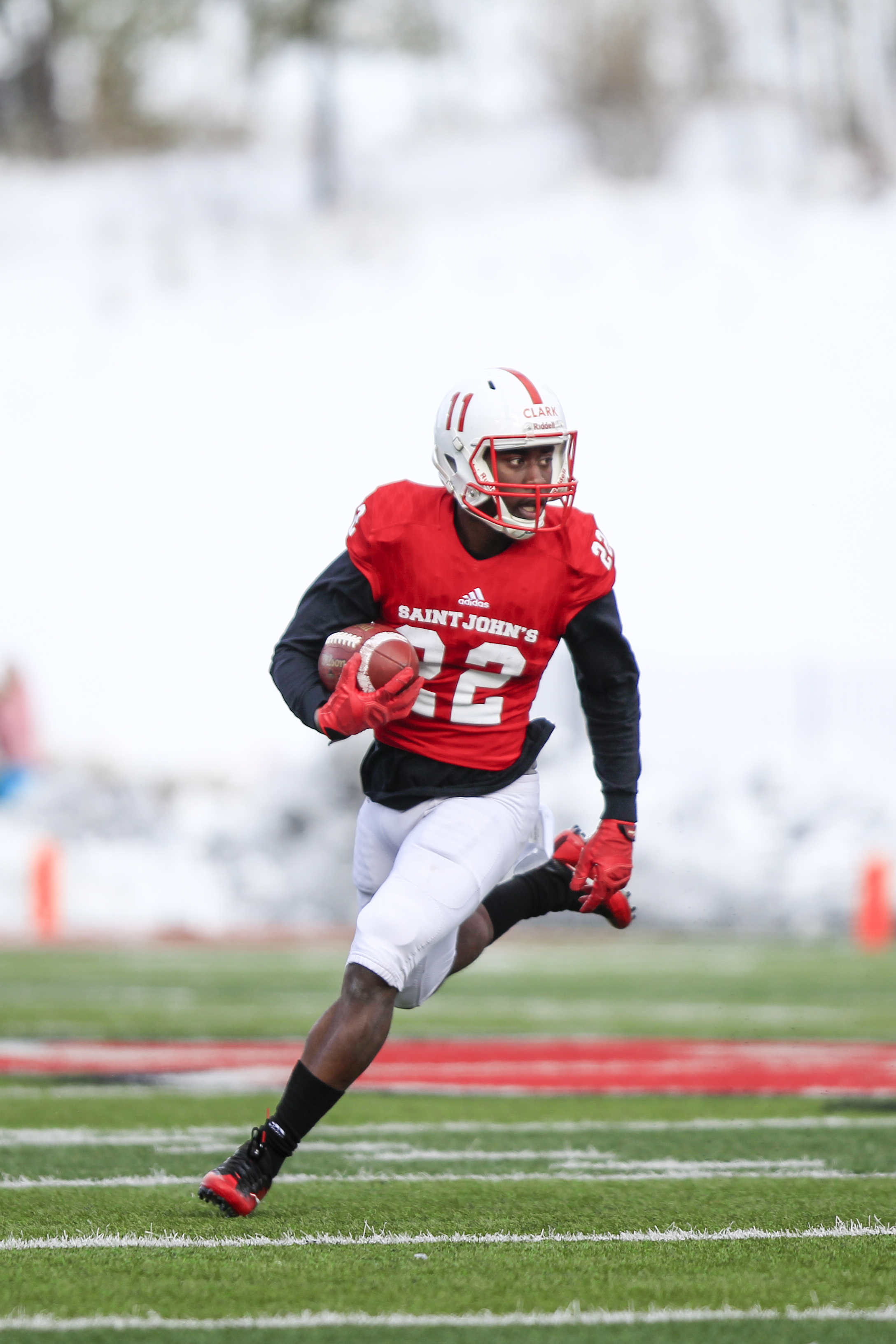 When Evan Clark '17 mentally scans the roster, he can’t help but get excited about the options available to the 2017 Saint John’s University football team’s offense.

“We have a full tool box,” Clark said in his typically animated manner. “We’ve got hammers, screwdrivers, power tools. We have an entire tool set.

“I might be the shiny hammer, but we’ve got other guys that are just as sturdy.”

None, however, are quite so potent as the explosive Clark, a game-breaking 5-foot-10, 185-pound wide receiver and kick returner who’s back for a fifth season with the Johnnies.

“It was exciting to know we’ve got him for another year – we’ve got a weapon that most teams don’t have,” said SJU head coach Gary Fasching ’81, whose team opens its season Sept. 2 against St. Scholastica at Clemens Stadium. “He’s the fastest guy in the conference.”

“I’m thrilled to have him back,” said sophomore quarterback Jackson Erdmann ’20. “It’s just such a blessing to have him on the team.”

“I know I have a blessing in my abilities,” added Clark, a communication major from Phoenix who received a medical hardship waiver from the NCAA for his injury abbreviated 2015 season and was granted a fifth year of eligibility.

He’s getting another chance, and he’ll be in the middle of everything this season for Saint John’s.

“If you’re coming back for a fifth year,” Clark said, “you want that.”

Since 2000, the Johnnies have had 29 fifth-year seniors who were granted an extra season of eligibility due to injury.

Elliott set the gold standard, catching 117 passes and accounting for 2,749 all-purpose yards and 19 touchdowns while earning the Gagliardi Trophy as the nation’s top Division III player and leading the Johnnies to the 2003 National Championship.

“He was the weapon,” Clark said. “You open the tool box, and he’s the hammer in there.”

Elliott caught passes, took handoffs, returned kickoffs and punts. He did everything.

The Johnnies would like Clark to reprise that role.

“(Elliott) has every record I could aspire for here,” said Clark, whose 4.4 speed in the 40-yard dash has drawn interest from professional football scouts. “I know I’m a weapon.”

“We want to utilize him the same way – in the return game, in the backfield, as a receiver,” Fasching said. “We’ve got to find ways of getting him the ball more.

“He’s the kind of kid where every play could go (for a touchdown). Somebody takes a bad angle, and he’s gone.”

That happened a lot during Clark’s stellar 2016 season, which he initially thought would be his last at Saint John’s.

The player who was a fast guy with suspect hands as a freshman and sophomore and mostly a spectator during an injury-plagued junior year blossomed as a senior, catching 43 passes for 892 yards (20.7 yards per catch) and 13 touchdowns.

Clark had a total of 64 touches (receptions, running plays and kickoff returns) and scored 16 TDs, one for every four times he got the ball.

Clark was selected to the D3football.com preseason All-America second team Aug. 1, and his mere presence creates opportunities for others.

“Last year, teams would shift over to him every play,” said Erdmann, who threw seven touchdown passes to Clark in last season’s first four games. “That just opens up plays for our other wide receivers.”

“It puts a lot more pressure on defenses. It’s the threat of him going deep on any play,” said SJU offensive coordinator Jim Gagliardi ‘89. “It opens you up underneath. And if he can make those catches underneath, they’ve got to drop guys and it means there’s fewer guys they can rush.”

Midway through that breakout 2016 season, Clark found out there could be another.

An Encore, and More

Four games into the 2015 season, Clark discovered he had torn the triceps and a ligament in his right elbow. His season was over, although he still made an impact.

“On the sideline, he was the biggest cheerleader I’ve ever seen,” Fasching said. “He’s just a real positive kid, even when things don’t go right.”

“If you ask Jim Gagliardi,” Clark said, “he would tell you he can’t think of a moment where I was quiet for more than two minutes.”

Four games into the 2016 season, Clark learned that his request for a medical hardship year had been granted by the NCAA and that he could return in 2017.

This season might not be the end of Clark’s football career. His uncle, Jessie Clark, spent eight seasons in the NFL (1983-90) as a fullback for the Packers, Lions, Cardinals and Vikings, and Evan’s speed might earn him a pro tryout.

“We have six NFL teams that are coming to watch him in practice,” Fasching said.

But right now, Clark’s focus is strictly on the 2017 season. He’s the lynchpin for a high-octane offense that averaged 40.2 points per game last season and could be even better this year.

“We’ve got a lot of guys coming back,” Erdmann said. “Obviously, the goal is national championship. That’s what we’re working for every day.”

“I’m 1,000 percent confident that we will score almost at will,” Clark said. “That’s just how confident I am in my teammates and our ability.”

The tools are there. The tool box is loaded.

The shiny hammer is ready.

“We know the potential we have,” Clark said. “We went to the second round (of last season’s playoffs) and fought a close game with a team (Wisconsin-Oshkosh) that went to the national championship.

“Now let’s see what we get to do when we have all the pieces. I’m really confident.”