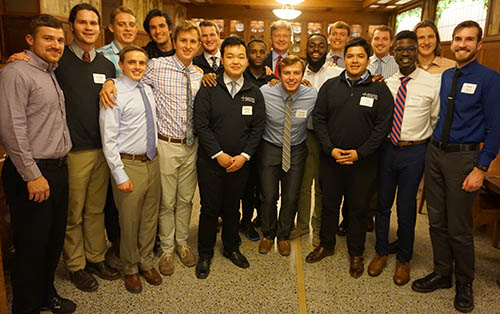 Seventeen of the nineteen members of this year's Benedictine Volunteer Corps class.

This adventure almost invariably becomes a life-changing experience – for those they’ll be helping, and for themselves.

Welcome to the Benedictine Volunteer Corps and this year’s class of 19 selectees. For everyone involved in the program, it’s something special.

“I think it ends up being transformative,” said Br. Paul Richards '78, OSB, founder and director of the BVC for 15 years. “In some degree and in each individual way, it’s a significant experience for all of them. It’s very satisfying.”

“It’s going to be a challenge,” said Dylan Lehrer '17, a computer science major who will spend 12 months teaching in Hanga, Tanzania, “something that will force me to develop as an individual.”

“I’m not doing it for me – I’m doing it for others,” added Alex Melchor '17, a psychology major who’s heading for Bogota, Colombia. “Especially when it comes to kids.”

The BVC, which is sponsored by Saint John’s Abbey in collaboration with Saint John’s University, began in 2003 with two sites (Newark, N.J., and Puerto Rico). It’s designed to provide selected Saint John’s alums with a year of volunteer service at a Benedictine monastery and an opportunity to participate in the monastic life of that community.

Since 2003, the Saint John’s Benedictine Volunteer Corps has sent over 170 men to 21 Benedictine monasteries around the world to support those communities in their work, prayer and common life.

These SJU graduates carry with them values of the Benedictine Tradition they absorbed as students and want to explore in greater depth through service.

That service element is part of the allure of a program that immerses newly minted college graduates in communities around the world.

“I definitely have wanted to step outside my comfort zone, push myself and push my limits,” said Jared McComber '17, a biology major who will be teaching and coaching in Newark. “I want to have an impact on other people’s lives.”

“Somebody who’s resilient. Somebody who’s reliable,” said Br. Paul, the former Saint John’s Boys Choir director who as an SJU undergraduate volunteered for a year at a Benedictine monastery in Puerto Rico. “Somebody who’s a self-motivator, self-starter, self-patroller.

“They’re on their own in these situations.”

BVC selectees are usually placed in pairs at sites ranging from the U.S. to Tanzania, Rome to Zambia, Israel to Sri Lanka. Newark is the only site in the United States.

“The Benedictine program is connected with my high school in Newark (St. Benedict’s Prep),” Melchor said. “My high school years I’d been having Johnnies as teachers and volunteers. I look up to those guys now. They really influenced me to come (to Saint John’s).

This year’s class finished its two-week retreat May 27. Then the real learning begins:

“To a man, every one of them goes through some ‘Why did I do this?’ moment,” Br. Paul said.

“I want to be able to make in impact on the people there in the community, work with the kids,” Lehrer said. “I’ve been working on my Swahili. It’s not too bad, actually.”

“There’ll be times when it can get hard,” Melchor added. “You’ll at least have somebody from the school that you both graduated from.”

“You attend the university, but I never really was that involved with the faith aspect,” McComber said. “It’s really interesting to see this whole other side that I never experienced.”

“They’re expected to participate in the prayer life of the monastic community at which they serve,” Br. Paul said, “so there has to be at least a glimmer of faith life.

“I’ve got kids in this particular group that are Muslim and Hindu. It doesn’t make any difference to me what God you believe in, but that you’re interested and open and willing to working on your life with that supreme being and doing it in this context.”

“I’m taking this not like a break, but a little step back,” said Melchor, who leaves for Colombia June 27. “There’s other things you can do. I know I won’t get another opportunity like this after graduating. I’m going to take advantage of it.”

“A year from now, I want a better understanding of what I want to do in the future,” said Lehrer, who leaves for Tanzania July 15.

“Something that stuck out during my interview with Br. Paul was the personal growth aspect, through being put in a totally different situation and being challenged and having to step up to the plate,” added McComber, who leaves for Newark July 20.

“That’s something that I really hope happens to me.”

Members of the 2017 Benedictine Volunteer Corps, with home town, major and city assignment: