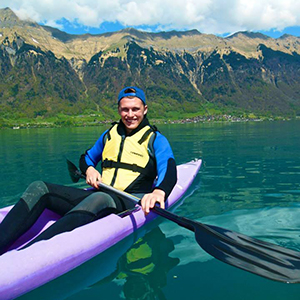 Austin Barkley earned a prestigious Fulbright Award to teach English in Mexico. After already having experience in teaching English as a second language in St. Cloud and abroad, Barkley will work as an English teaching assistant for 10 months starting in September.

"I think I'm going to get really ingrained in my community. This happens during a semester abroad but during a year you get a daily grind, and that's how you get to know what it's like to live in place," Barkley said. "When you get up and it's 'Just another day in Mexico' instead of 'It's vacation.' "

Earning the Fulbright Award allows for U.S. students to be placed in different schools and universities overseas to improve foreign students' English while also promoting growth in language skills and knowledge of the host country for the award recipients. Individual studies/research plans along with teaching responsibilities are also available to students.

"It's exciting because I know I'm going to have at least one year of an adventure that I'm going to look back on and say, 'That was pretty awesome.' It might not be easy or fun at every point but that's the whole point of an adventure," Barkley said.