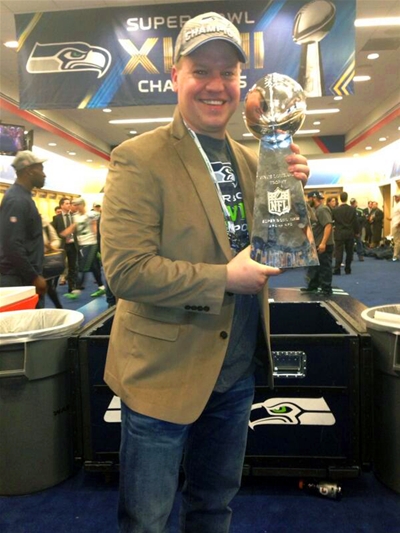 Trent Kirchner '00 with the Lombardi Trophy.

Most Saint John's University students are pretty good when it comes time to network for a professional career.

Trent Kirchner, however, kind of took it to the extreme. The 2000 SJU graduate talked his way into one of the biggest events the National Football League puts on, and ultimately landed a job with the Seattle Seahawks football team.

After stops with the Washington Redskins and Carolina Panthers, he returned to the Seahawks in 2010. Today, he is the Seahawks' pro personnel director, and is celebrating the Seahawks' first Super Bowl win.

"The (two) Super Bowls the Seahawks have been in, they go to Detroit (in 2006) and New York," Kirchner said, laughing. "Not that there's anything wrong with Detroit or New York, but you'd like to be playing this game in a warm weather place."

Back some 14 years ago, Kirchner would have gone to the ends of the earth to get a job in football.

Kirchner, a native of Fulda, Minn., came to SJU and played football for two seasons. He was a quarterback, but was stuck behind Tom Linnemann '00 and Corey Stanger '00 on the Johnnies' depth chart.

"I tried to be a quarterback, but they had Linnemann and Stanger, and I wasn't going to play. I just dove into trying to pursue things after college," Kirchner said. "I knew I wanted to get into sports. My freshman year, I started writing letters to guys in Major League Baseball, the NFL and NBA."

He first thought of becoming a player agent, then was interested in becoming a scout. Eventually, he settled on becoming involved in player evaluation in the front office of a team.

"Football was always my first love," Kirchner said. "So, I just kind of dove into contacting guys in the NFL and simply started writing letters. I didn't hear back from a lot of people. I would literally write letter after letter. It was borderline crazy."

But his big break came in February 2000, during the annual NFL Scouting Combine. He drove to Indianapolis, Ind., and wound up outside the security gate when Marc Trestman - then the offensive coordinator of the Arizona Cardinals and now the head coach of the Chicago Bears - walked out.

"I introduced myself. I hadn't written him, because I was contacting personnel guys, not the coaching side. I had heard a lot of good stuff about Marc, and then he said, 'Tell you what. Here's my quarterback coach's pass. He's coming in tomorrow. Take this pass, and go in and meet whoever you want to meet.'

"Fortunately, I had made friends with the security guard. Unfortunately, I told him what my name was. And, the name didn't match the pass. But he just winked at me and said, 'Congratulations.' He let me in, and that's where I met John Schneider for the first time."

Schneider, now the Seahawks general manager and a graduate of the University of St. Thomas, was working for the Kansas City Chiefs at the time. "I patted him (Schneider) on the shoulder, and he turned around and looked at me and it was like, 'What the hell?' I ended up helping the Chiefs there," Kirchner said.

That led to a post-graduate internship working in both the public relations and scouting departments for the Seahawks in 2000-01. He then worked as a college scouting coordinator for the Washington Redskins (2001-02) and a pro scout for the Carolina Panthers (2002-09).

Kirchner rejoined the Seahawks as the assistant director of pro personnel in February 2010. In 2013, he was named the Seahawks' pro personnel director. In this role, he oversees the scouting of Seahawks' opponents and the evaluation of all professional football leagues. He also coordinates free-agent tryouts, monitors NFL transactions and assists in the recruiting and signing of all free agents.

"We only have four guys remaining on our roster from when Coach (Pete) Carroll and John Schneider got in here (in January 2010)," Kirchner said. "So, it has been a complete overhaul of the roster. That's made it (getting to the Super Bowl) more gratifying this time, in that we've been with everybody since they've been here."

In fact, Kirchner said his two favorite times of year is signing undrafted free agents after the NFL Draft is completed, and then monitoring players cut by other teams during the NFL preseason.

"You can really get some good young players, whether it's the fourth cornerback, or the backup guard or whoever. You're always looking for guys that maybe can do one or two things that you're looking for. That's the one thing John Schneider has instilled in all of the scouts, and that's to find one quality and work with the positives. Don't dwell on the negatives.

"Being open to broad thinking and the openness to explore all avenues was probably one of the bigger things I learned (at SJU)," Kirchner said.