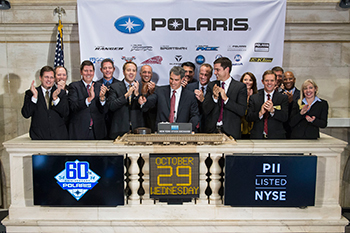 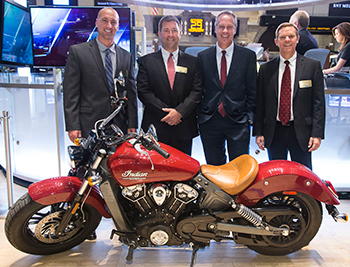 The Polaris executive group, including Bennett Morgan '85, Mike Malone '80, Mike Dougherty '89, and Matt Emmerich '98, rang the closing bell at the New York Stock Exchange on Oct. 29 in celebration of the 60th Anniversary of the company.

Polaris, based in Medina, Minn., was founded in 1954. The company developed the first modern snowmobile in 1956 and today its products range from motorcycles to ATVs.

The company became a public company in 1987, trading on the New York Stock Exchange under the symbol PII.

The Oct. 29 Closing Bell Ceremony was televised nationally. Throughout the day, Polaris exhibited a selection of its innovative vehicles in "Experience Square" on the street outside the NYSE.

"Innovation is the lifeblood of this company, and we have an incredible global team of nearly 7,000 employees relentlessly focused on driving innovation in everything we do," said Polaris Industries Chairman and CEO Scott Wine in a press release.