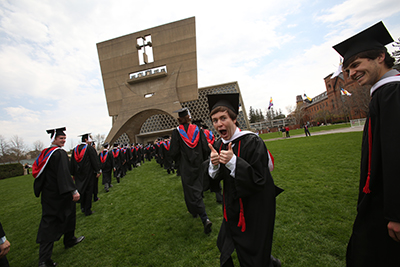 On May 18, 454 men joined the Saint John's Alumni Association when they received their undergraduate degrees from President Michael Hemesath '81. They were part of the fourth-largest graduating class in SJU's 157 years.

For one graduate, Max Berkelman '14, the day was a unique experience. His mother, Kathleen Blatz, was the guest speaker and received an honorary doctorate. Blatz, a former chief justice of the Minnesota Supreme Court and 15-year state representative in the Minnesota House, has many familial connections to Saint John's and previously served on the Board of Regents.

"While I'm proud of my personal connection, my respect for Saint John's University isn't rooted in family bias or parochialism," Blatz said. "It is a respect that has grown out of many, many encounters.

Michael Rogers '14, of Mankato, Minn., was the student commencement speaker.