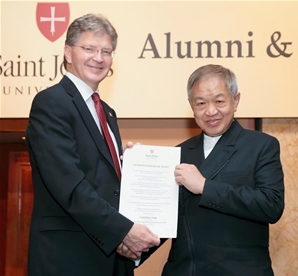 Canning Fok received the Fr. Walter Reger Distinguished Alumnus Award at a gathering of the Hong Kong Alumni Chapter on Tuesday, March 4. This award, presented by President Michael Hemesath, is the highest honor given by the Alumni Association. The award recognizes outstanding service to the Saint John's community.

Fok graduated from SJU in 1974 with a degree in accounting and economics and went on to receive a degree in financial management from the University of New England in Australia. For more than 30 years, Fok has worked at one of Asia's largest companies, Hutchison Whampoa Limited, serving as executive director beginning in 1983 and as group managing director since 1993.

He has hosted numerous Saint John's students, guests, alumni and presidents when they have visited Hong Kong. Fok also served on the Saint John's Board of Regents and currently serves as Regent Emeritus.

Bernie Touhy '72, former president of the Alumni Association, was one of several alumni who nominated Fok for the Reger Award. "Canning has earned various and considerable successes throughout his career," said Touhy. "But none of that is brought to bear when dealing with him. Indeed, it is his continuing benevolence to others, with humility, that still defines who he is and makes him deserving of this Walter Reger recognition."