Ladner '48 Was Devoted to Saint John's 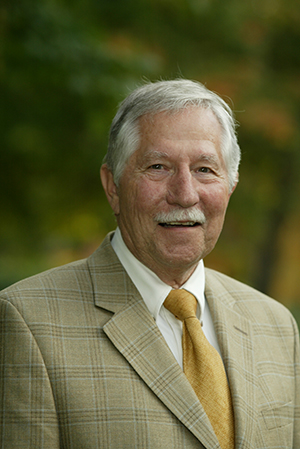 Ladner and his wife, Julia, made numerous leadership gifts to the Saint John's community, including support for the Science Center, Sexton Commons, the Benedictine Institute, the Ladner Scholarship Fund and a significant contribution to build the Abbey Guesthouse. They were also major benefactors of Saint John's School of Theology and Seminary, Saint John's Preparatory School and the Saint John's Pottery, for which they made the leadership gift to move Saint Joseph Hall and establish the present-day Pottery Studio.

Ladner was also a longstanding member of the Fr. Don Talafous Giving Society. He received the highest honor given by the Saint John's Alumni Association, the Father Walter Reger Distinguished Alumnus Award, in 1997.

"I extend my deepest condolences to the Ladner family," said Saint John's University President Michael Hemesath '81. "The Saint John's community is bidding good-bye to one of its very best friends. Frank was a good man and a consummate Johnnie. His record of service, support and friendship to alma mater is unparalleled. From significant financial support for scholarships and the Abbey Guesthouse to volunteer positions as chair of the Board of Regents and Chair of the Campaign for Saint John's, Frank has always been a stalwart supporter of Saint John's. He will be a part of Saint John's forever."

The entire Saint John's community joins the Ladner family in prayer and in celebration of Frank's life.

"Frank has been such a strong supporter of all of Saint John's. He had a rich sense of how all the pieces fit together. Blessed with a wonderful wife and family, he lived out a sense of gratitude for all that he had received, and contributed to Saint John's and many other recipients out of the spiritual sense. Gifted with a good sense of humor, great energy, and gifts for leadership, Frank helped us be a better community and place."
Abbot John Klassen '71, OSB, Saint John's Abbey

"Frank and I were roommates in Benet Hall the year the seven-foot wide singles were provided with bunk beds and declared doubles under the pressure of GI enrollment. Frank was the one who suggested that the most efficient use of the space would be to use the bunk bed as a divider with lockers and door on one side, desks and window on the other, which is what we did at the slight inconvenience of crawling through the bed to get from desk to door and back again. The arrangement was a little ridiculous but it worked and was a tribute to Frank's make-do spirit.

Frank was not only efficient but upbeat and fun to be with. He had a genuine interest in people. He remembered names and family connections. When we last spoke he was in the hospital but he asked how St. John's was doing. He was that kind of friend, generous, focusing his attention on family and friends rather than himself."
Fr. Hilary Thimmesh '50, OSB, Saint John's University President Emeritus