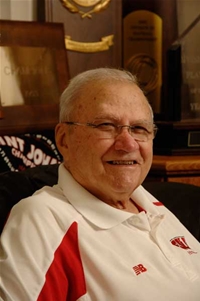 After 489 victories and 60 great years, John Gagliardi's retirement will become official on June 30. The legendary coach is replacing the time he spent worrying about upcoming football seasons with time spent with his family and new-found hobbies.

The door to John's office will remain open as he accepted the offer to stay in Warner Palaestra. Although John will still have a presence on campus, he is making an effort to let the new coaching staff take the reins. "I'm trying to let them do their own thing," he said. "They have to be able to do it the way they want to."