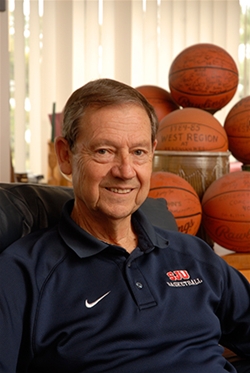 When Coach Jim Smith became SJU's head basketball coach in 1964, he didn't expect to be here 50 years later. As Coach Smith begins his 50th season as the Johnnies head coach, he and a few of his players reflected on the highlights of his career with the St. Cloud Times.

Smith's teams have won seven MIAC titles, five MIAC playoff championships and made 13 trips to the NAIA and NCAA Division III national tournaments. With a career record of 755-535, Smith is tied for 18th place all-time in every division of collegiate basketball when it comes to career victories.

His players appreciate him not just for his record, but for what he taught them. "His enthusiasm, his coaching ability and his love for the game becomes infectious in all his players," said Joe Mucha '66, a member of Smith's first team in Collegeville in 1964. "He made basketball a lot more fun for all of us."