Ahmann '52: Fifty Years Since the March on Washington 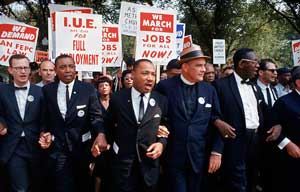 Mathew Ahmann '52 (far left) at the March on Washington for Jobs and Freedom on August 28, 1963.
Credit: Time & Life Pictures/Getty Images

On August 28, 1963, more than 250,000 people gathered in Washington, D.C. for what has been called the greatest demonstration for freedom in the nation's history. The lone Catholic chairman and a voice from the podium that day was Mathew Ahmann.

Ahmann was appointed the founding director of the National Catholic Council for Interracial Justice (NCCIJ) in 1960. Among his accomplishments, he organized the National Conference on Religion and Race in 1963, which brought 657 religious leaders from 78 denominations together to discuss race issues.

Just seven months later, Ahmann was the Catholic presence both as a chairman and speaker at the March on Washington for Jobs and Freedom.

Ahmann may be one of the least known but most important ­figures in the history of Catholic support for the Civil Rights Movement in the 60s. "Matt's work brought the Catholic Church out of its shell on civil rights issues," said Jerry Ernst, who worked for the NCCIJ and later worked with Ahmann at Catholic Charities USA. "His thoughtful, methodical, action-oriented method changed the way the church operated on these issues. It opened up the church."

Mathew Ahmann died in 2001. He will be honored posthumously in October with the Colman J. Barry Award for Distinguished Contributions to Religion and Society.

Complete story on Mathew Ahmann in the Saint John's Magazine.