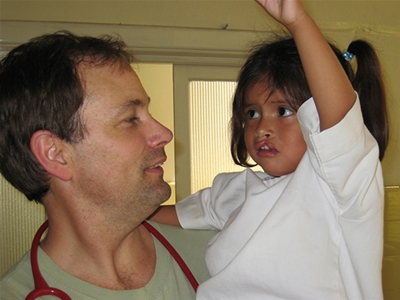 Dr. Brian Prokosch has made more than two dozen trips to South America supporting a reconstructive surgery program for Peruvian children with cleft lips, cleft palates and burn scars. Prokosch was awarded the Fr. Jack Davis Starfish Award for his work, named in honor of Fr. Jack Davis '65. The Starfish Award is given by Friends of Chimbote, a faith-based organization that supports programs that improve and transform the lives of the poor in Chimbote, Peru.

Fr. Jack Davis first arrived in the dusty, coastal town of Chimbote more than 35 years ago and has worked there ever since. Chimbote had once been the most important fishing port in Peru, but decades of economic calamities have left large segments of the city's 400,000 residents in severe poverty.

Scores of Johnnies and Bennies have volunteered in Chimbote during Davis's tenure. Current students visit during winter and spring break, and some have served in Chimbote supported by the Fr. Giles Nathe Missionary Service Grant at SJU. It was because of this grant that Prokosch first came to Chimbote in 1982 as a recent SJU graduate.

You can read more about the Johnnie connection to Peru in the next issue of the Saint John's magazine, coming out in February.