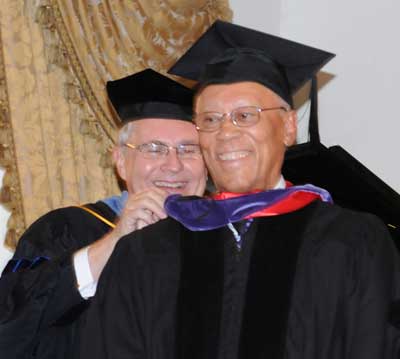 Sir Arthur Foulkes, Governor-General of the Commonwealth of the Bahamas, was awarded an honorary Doctor of Laws by Fr. Bob Koopmann, OSB, at a ceremony in Nassau, Bahamas on Oct. 2. Foulkes was honored for his role in achieving peaceful political and social change in the Bahamas, and for representing his country in world affairs.

Saint John's relationship with the Bahamas began in 1891 when the first monks ministered there. Since then, 126 monks have served the people of the Bahamas and 650 Bahamian young men have attended Saint John's University.

Foulkes was the first Bahamian to receive an honorary doctorate from Saint John's.

News Story from The Nassau Guardian