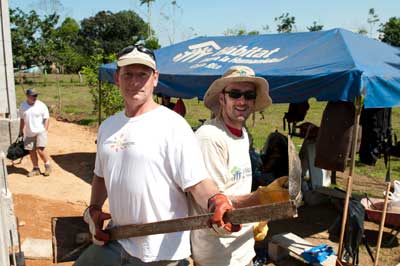 Last March, Jeff Smith led a team of 22 volunteers from the Twin Cities to work with Habitat for Humanity Costa Rica. Many of the volunteers had never met, but were brought together by Habitat's mission. The group spent the week working alongside four future homeowners moving dirt, mixing concrete and digging post holes in 90 degree heat.

Smith soon discovered that he and one volunteer on the trip shared more than their interest in Habitat. Both Smith and Mark Kalla '81 attended Saint John's. "We swapped stories of our study abroad experiences at SJU, playing varsity and intramural sports and fond memories we had of teachers at SJU," said Smith.

Both Smith and Kalla point to the Benedictine value of service that has stuck with them since their days in Collegeville. "Sometimes it takes travelling all the way to Costa Rica to be reminded of what a great school SJU really is," said Smith.