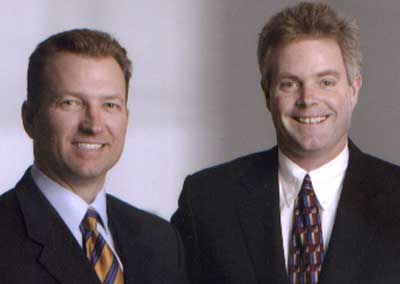 Tim Fleming and Bill Jeatran of RJF Agencies will share the first SJU Entrepreneur of the Year Award from the Donald McNeely Center for Entrepreneurship. The award recognizes Johnnies who start and manage a business with entrepreneurial spirit and practice Benedictine values in the workplace and in their lives.

RJF Agencies provides property and casualty insurance and employee benefits to middle-market companies in a wide range of industries. Jeatran founded RJF Agencies in 1986 and served as chief executive officer. In 1988, Fleming joined Jeatran, his roommate at SJU, serving in many leadership roles before eventually becoming president.  Under their leadership, RJF Agencies became one of the largest independent insurance agencies in the upper Midwest, employing more than 150 people and being named as one of the Top Workplaces in the Twin Cities by the Minneapolis Star-Tribune.

Marsh & McLennan Agency acquired RJF Agencies in 2011. All of RJF's employees and leadership team, including Fleming and Jeatran, have joined Marsh & McLennan.

The Entrepreneur of the Year Awards will be presented September 8, 2011 at the Marquette Hotel in Minneapolis.