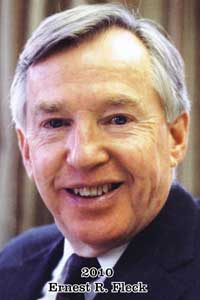 Ernest Fleck '43, was inducted posthumously into the North Dakota Petroleum Council Hall of Fame. Fleck, who passed away in 1995, practiced law in Bismarck, North Dakota, for 46 years, working in numerous areas including oil and gas, mining law and environmental law. "Ernie was an excellent lawyer and strong leader for the oil and gas industry for its first four decades in North Dakota. He was responsible for many legislative compromises that enabled the industry to remain viable and active in North Dakota, particularly during the turbulent early 1980s," said John Morrison, a fellow inductee.