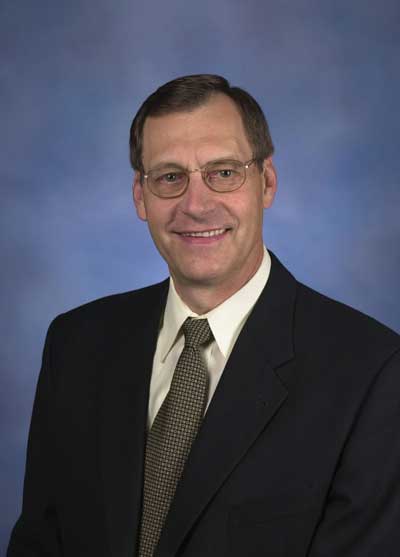 Joe Mucha '66 will receive the second Basten Award during halftime festivities of the Homecoming football game on Saturday, Oct. 2.  The award, a full-size wood football with leather laces, is given annually to a former Johnnie football player who in his life as an alumnus has exhibited outstanding leadership traits, involvement in his community and alma mater, a sense of fair play carried beyond the gridiron, and an overall commitment to excellence.

Mucha, a starting end on both the 1963 and '65 Johnnie national championship football teams, is retired vice president for human resources at General Mills.  Recipient of the SJU Fr. Walter Reger Distinguished Alumnus Award in 2001, Mucha is a past president of the SJU Alumni Association and a former Regent.  Mucha has been an active fund raiser for Saint John's and continues his volunteer service to alma mater.

John Gagliardi, Saint John's head football coach who coached both Mucha and Basten, commented:  "As a student athlete here, Joe was truly awesome.  He was a big factor in our first two national football championships .  He doubled as a star basketball player and is one of the best football-basketball players we have ever had.  He also excelled with his academics and his ROTC career.  He continued to succeed in his post collegiate career rising to a high level position at General Mills.

"Along with all this he was, and is to this day, an exceptionally fine person," Gagliardi added.

Nominations for the Basten Award may be made to the SJU J-Club.  The selection committee includes the SJU athletic director; the J-Club secretary; a member of the Basten family; Kiley; and the immediate past recipient of the award.  The committee coordinates its selection with the SJU Alumni Association Awards and Recognition Committee.