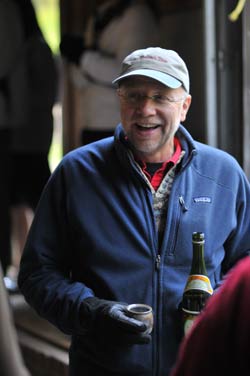 Thirty years ago, Richard Bresnahan '76 was invited to establish a pottery studio at Saint John's by Fr. Michael Blecker, OSB, president. Bresnahan returned from an apprenticeship with Takashi Tarōuemon in Japan to locate clay and begin this work.

Bresnahan's success is legendary. Gerry Williams, editor of Studio Potter refers to Bresnahan as "both an artist and an ambassador for the natural environment, he takes his place as one of the preeminent potters in contemporary American ceramics."

Go to "Earth, Wind, and Fire" in The Chronicle of Higher Education for a feature story on Bresnahan and the Saint John's Pottery.