It's been nearly a decade since Donald Jackson embarked on the calligrapher's Sistine Chapel: the handwritten, illuminated Saint John's Bible. Now, through the Heritage Program, individuals and artistic, religious and cultural institutions can experience and share the only full size, limited edition, signed and numbered reproductions of this extraordinary manuscript. Three gifting events in April introduced the fine art reproductions to the world.

The most rare, full-sized reproduction of The Saint John's Bible was presented to His Holiness Pope Benedict XVI on April 4. As he turned the pages, the Holy Father described it as "a work of art, a great work of art." The presentation occurred at the Vatican in Rome during the annual meeting of the Papal Foundation. The Holy Father received the St. Peter Apostles Edition of The Saint John's Bible and a handwritten dedication page by Donald Jackson, the Bible's artistic director.

The Holy Father received the Wisdom Books volume, the first completed volume of the St. Peter Apostles Edition. The Wisdom Books volume is approximately 2 feet tall by 3 feet wide when open and weighs about 20 pounds. Subsequent volumes will be given to the Vatican over the next four years.

"From the time that Donald Jackson inscribed the first words of the Bible, this has been meant as a Bible for all people, a gift to the world," said Br. Dietrich Reinhart, OSB, president, Saint John's University. "Now, after several years of anticipation, our dream of sharing the Bible worldwide has become a reality."

The St. Peter Apostles Edition of The Saint John's Bible was a gift to Pope Benedict XVI from Saint John's University and Abbey through the generosity of the Gerald and Henrietta Rauenhorst Foundation. 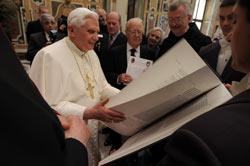 "For our family, The Saint John's Bible is a beautiful art masterpiece, and more than that, it's a way to spread the faith around the world," said Judy Rauenhorst Mahoney, board member of the Papal Foundation and daughter of Gerald and Henrietta Rauenhorst.

Archbishop Harry Flynn was recognized on April 24 with a rare, full-size reproduction of The Saint John's Bible at a ceremony at the Cathedral of Saint Paul in honor of his retirement.

Saint John's University and Abbey and the Frey family of Minneapolis presented Flynn with the first completed volume of the Heritage Edition of The Saint John's Bible.

In presenting the first volume of the Heritage Edition to Flynn, Eugene Frey said how fitting it was for his family to present the Wisdom Books to such a wise friend and a wise person. "Archbishop Flynn has made the whole state of Minnesota a better place," said Eugene Frey. "This is our way of thanking him for his priestly life and the outstanding leadership he has provided to all of us."

In accepting the Wisdom Books, Flynn spoke of God's mandate to remain in His love. "The Frey family has accepted this mandate in so many ways. That love has been strong and a gift to so many," he said.

Flynn continued, "The Saint John's Bible says in the most artistic way - in its beauty and its boldness - we will not be ignorant o 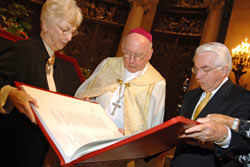 f the scripture. How marvelous it is that this great work of art was initiated by Saint John's University."

"Saint John's cannot think of a more appropriate person to receive this Heritage Edition," said Br. Dietrich Reinhart, OSB, president of Saint John's University. "Archbishop Flynn has a special place in the heart of all of us so it is a privilege to be here today with the Frey family to honor a man of universal kindness and integrity."

The Heritage Edition of The Saint John's Bible is a gift to Flynn from Saint John's University. The gift was made possible through the generosity of the Eugene and Mary Frey family as a token of their high regard and esteem for the Archbishop, and in celebration of his more than 11 years of pastoral service and leadership as the Archbishop of the Archdiocese of Saint Paul and Minneapolis.