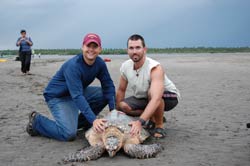 Greetings from El Salvador! My name is Michael Liles and I am a '00 Johnny. I've been living down here for almost 2 years now working on sea turtle projects with a very small Foundation called the Fundacion Zoologica de El Salvador (FUNZEL).

Through one of the projects that I am coordinating, titled "Sea Turtle Conservation and Research, El Salvador", we discovered that from September 2007-November 2007, El Salvador received 51 nests of a very rare species of turtle: the critically endangered Eastern Pacific Hawksbill. This population of sea turtles is believed to be the most threatened in the world and on the edge of extinction. It has received little attention from the conservation community over the years and many marine biologists had actually given up hope that it could ever recover. Virtually nothing is known about the migratory routes, feeding grounds or, until very recently, primary nesting beaches of this population.

In January of this year, I had the opportunity to present our findings at the 28th Annual Sea Turtle Symposium in Loreto, Mexico. As it turns out, this small number of Hawksbills reported in El Salvador was the largest number reported in the entire Eastern Pacific (which is truly incredible considering that El Salvador is the smallest and most densely populated country in Central America!). After returning to El Salvador, we spoke with locals at the beaches where the Hawksbill nests were reported, along with data-sharing meetings with staff from the Ministry of the Environment of El Salvador, to determine the number of nests during the months that fell outside of our study, particularly May-August, as this is believed to be the peak nesting season for the Hawksbill. As it turned out, the total number of nests confirmed during 2007 was not 51 but, in fact, 120!

To verify this information and to take a deeper look into Hawksbill nesting in El Salvador, I was granted a small amount of funding from the National Fish and Wildlife Foundation of the US to conduct a study titled, "Management and Conservation of the Hawksbills of El Salvador". This project began in May 2008 and is set to finish in December 2008. Thus far in the study we have reported approximately 70 Hawksbill nests!

To take full advantage of this event, we invited the above organizations to spend 3 days before the workshop at one of the principal Hawksbill nesting sites of El Salvador, with the purpose of attaching satellite transmitters to nesting Hawksbills. It was a long shot really, because there are so few Hawksbills and so many beaches that complete coverage is very difficult. The risk would be well worth it, though, because it presented us with the opportunity to attach the FIRST transmitter ever to an adult Eastern Pacific Hawksbill.

As it turned out, at the end of the 3 days, we had made history by not only attaching one transmitter, but THREE! Now, for the first time ever, we are receiving the first glimpse into their movements, migratory routes and feeding grounds. Track these turtles first hand.

The 1st Eastern Pacific Hawksbill Workshop itself was also historic. It was the first time that all of the sea turtle experts in the region had been called together for the single purpose of talking about the Hawksbill of the Eastern Pacific. One of the most important results that came from the workshop was the determination that El Salvador receives more than 65% of all Hawksbill nests in the region, from Mexico to Ecuador. It has truly earned its nickname as the "capital of the Eastern Pacific Hawksbill!" Because of El Salvador, there is hope once again this population can survive!