It's a Bronze Medal for Schnobrich '01 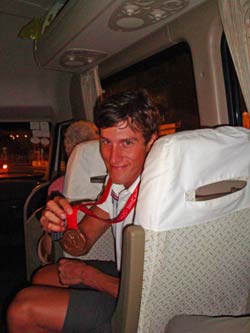 The U.S. men's eight-man boat, including Matt Schnobrich '01, won the bronze medal in Olympic rowing at the 2008 Beijing Olympics on August 17.

Schnobrich qualified for a spot on the team by winning the men's pair at the U.S. Olympic Team Trials in June with teammate Josh Inman. He says his rowing experience at Saint John's fostered an overall enjoyment of the sport. "I never forget the days of paddling around Lake Sagatagan without a coach," he said in an email to Thom Woodward '70 before the Olympics.