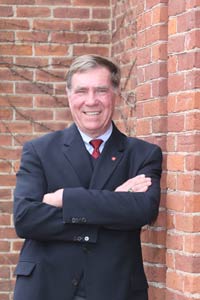 Dave Wendt '63 was presented the Fr. Walter Reger Distinguished Alumnus Award at the 2008 Homecoming banquet.  Wendt was recognized for his nearly four decades of loyal service to alma mater.  In accepting the award, he recounted the kindness Fr. Walter had shown him while hospitalized his junior year at SJU.

The Alumni Association Board of Directors selected Dave Wendt '63 as this year's recipient in recognition of nearly four decades of loyal service to alma mater.