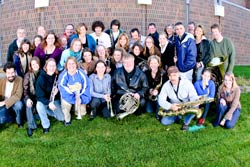 A group of over 40 alumni from the CSB/SJU Wind Ensemble assembled October 18 to celebrate Dr. Dale White's thirty years as director. There was representation from Dale's first year directing the ensemble in the fall of 1979 through graduating alums from the spring of 2008. The day included rehearsals, touring of the new addition of the Benedicta Arts Center rehearsal spaces, a barbeque and an evening concert and reception. The concert included performances by the present CSB/SJU Wind Ensemble, the CSB/SJU Alumni Wind Ensemble and the combined groups. The program was entitled "Old Wind Ensemble and Classical Favorites" and included Armenian Dances, Lincolnshire Posy, First Suite in Eb by Holst, Florentiner March, Hats Off to Thee, Procession of Nobles, Bolero, and A Slovic Farewell.