On February 2nd, 2022, Amir Locke was murdered by the Minneapolis Police Department while he was sleeping. The SJU Senate, in conjuction with the CSB Senate, created a statement, asking for the CSBSJU community to educate, listen, and act to end the injustices.

On Monday, June 8th, 2020, the Saint Ben’s and Saint John’s Senates hosted a campus-wide Zoom event to address the horrific murders of multiple Black individuals across the United States at the hands of the police. In somber recognition that this narrative was not new, but rather a recurring theme exemplifying hundred years of racial oppression, bias, and discrimination, we sought to examine our very own community.

On Wednesday, June 10th, the Saint Ben’s and Saint John’s Senates reconvened with students and faculty to brainstorm ideas, generate solutions, and identify specific issues in our campus communities. In this session, we identified seven different aspects of the CSB/SJU community that we felt needed work: CSB/SJU as a whole, students, professors, Life Safety and Campus Security, admissions, the City of Saint Joseph and the Saint Joseph Police Department, and the Senates.

Wanting to not simply just provide another verbal statement, but seeking to catalyze action within the CSB/SJU community, the Saint Ben’s and the Saint John’s Senates have generated this document to serve as a call to action for these seven different groups. We envision two campuses where racial bias, discrimination, and oppression do not exist. With active recognition and awareness of the issues that do arise on our campuses, continued discussion and action with important stakeholders in our institutions, and continual promotion of anti-racist education and ideals, we believe that CSB/SJU can become a bastion for anti-racist ideologies and practices.

Please read the full document for more information and the official calls to action. 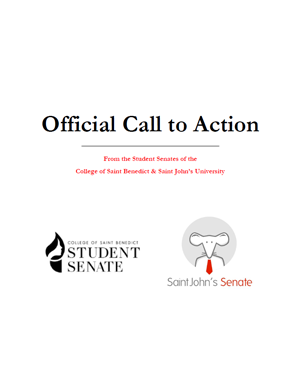