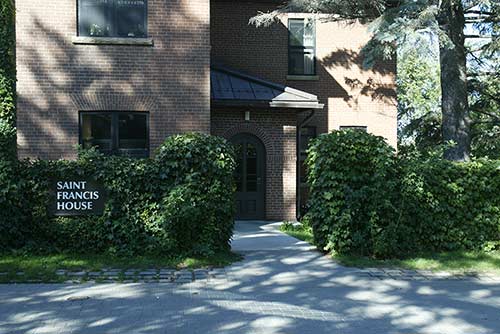 Sheltered by a fieldstone wall and spacious lawn, Saint Francis House (Frank House) was built in 1904. This three story brick building with basement, occupies about 8,200 square feet, and is located west of the kitchen. Originally, the building was constructed to house the French Presentation Sisters who worked in the kitchen service from 1904 to 1913. A brick addition of two stories providing space for a private chapel on to the west side of the residence was added in 1914, and in 1943, a summer garden kitchen designed by Philip Heitkemper, OSB, was built west of the convent. The building was reclaimed as student housing in 1964 as Saint Francis House. The renovations included single, double and triple rooms for about 50 upperclassmen students. Sinks were installed in each room with laundry facilities in the basement. In 1983 a complete renovation took place when rooms were converted entirely into 20 singles and ten efficiency apartments for graduate students in the School of Theology. The final restoration and renovation was in the summer of 1992, kitchen was totally enclosed, weather-proofed and became Saint Francis Chapel.