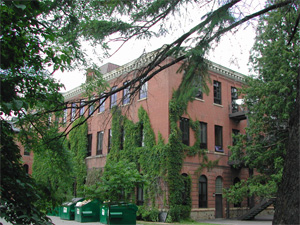 Wimmer Hall was designed by Charles Aldrich of Minneapolis and was constructed in 1901.  Like many of the older buildings on campus, Wimmer Hall had a previous life.  It was designed and constructed to serve as the library for Saint John's University and served that purpose until the construction of Alcuin Library in 1966.  During its earliest days, its top floor also housed one of the first photographic studios in Minnesota along with a rather significant natural history museum.

Minnesota Public Radio is one of the nation's premier public radio stations producing programming for radio, internet, and face-to-face audiences. Founded as a college station in 1967 at SJU in Collegeville, MN, it operates a 37-station radio network covering Minnesota and parts of Wisconsin, the Dakotas, Michigan, Iowa, Idaho and even Canada. MPR has won more than 800 journalism awards, including the Peabody Award and the Alfred I. duPont-Columbia University Gold Baton Award in 2001.

MPR serves a regional population of five million people and has nearly 90,000 members.  With over 780,000 listeners each week, it has the largest audience of any regional public radio network.