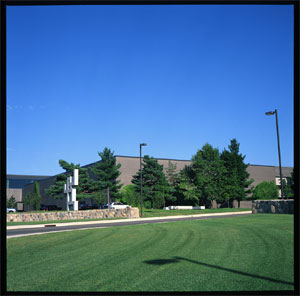 Designed by Ray Hermanson of the Traynor, Hermanson and Hahn architectural firm, the Warner Palaestra opened its doors in the fall of 1973. It was renovated and updated in 1997.

The Warner Palaestra sports center serves as the primary headquarters for University athletics.  The Palaestra features the 2,500 seat Sexton Arena basketball courts, where the Minnesota Timberwolves held their pre-season training camps in 2004, 2003, 2002 and 1999.  Another marquee feature is the 5,600 square foot fitness center with its many free weights, weight machines and aerobic machines.  Other notable aspects of the Palaestra are an eight-lane 25 yard pool with 1 and 3 meter springboards and a 5 meter platform; a wrestling room; a forty-foot climbing wall; four racquetball/gravityball courts; an up-to-date sports training facility plus team and public locker rooms.

Connected to the Warner Palaestra by McKendrick Hall is the Donald McNeely Spectrum, the campus field house.  The Spectrum offers an eight-lane indoor track, five indoor tennis courts, along with batting and golf cages.  In addition to the Palaestra and Spectrum, SJU sports facilities include eight outdoor tennis courts and the SJU Sprinturf football field surrounded by a 400-meter all-weather track located in Clemens Stadium.

More than ninety percent of the student body participate in varsity, club or intramural sports. In addition to the varsity baseball, football and soccer fields, the campus includes 10 acres of fields dedicated to intramural and club sports.