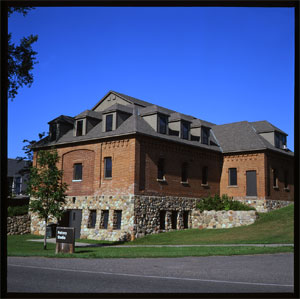 Saint Jospeh Hall was designed by Father Raphael Knapp, O.S.B., and was constructed in 1891. Joe Hall has had a long and diverse history.  Its first purpose was to serve as a carriage house. It was later renovated to provide housing for unmarried employees who wished to live on campus.  For some years it served as graduate student housing and later as undergraduate housing.

Joe Hall originally sat where Sexton Commons now sits. To clear the site for construction of the Campus Center, Joe Hall was moved in the summer of 1993 to its present location on the west edge of campus.

The two upper stories continue to serve as private rooms for undergraduates, and the basement houses the Saint John's Pottery Studio.