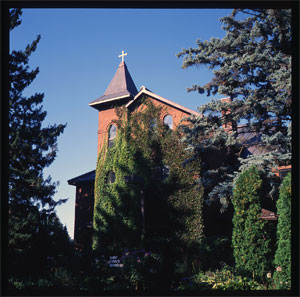 Saint Francis House was designed by Father Raphael Knapp, O.S.B., and was constructed as a convent in 1904. The first occupants of Frank House were the sisters who ran the Saint John's kitchen for decades. When sisters no longer did the cooking, the building served for a time as graduate student housing and was later renovated for undergraduate students with a mix of apartments and private rooms.