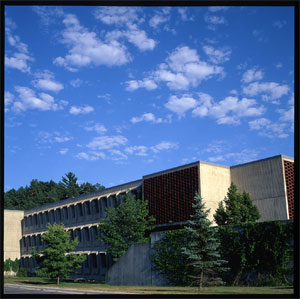 Bench biology, that is, biochemistry, cell biology, microbiology, and histology, along with research space for faculty and students is provided in the New Science Center. Chemistry, nursing, and nutrition are taught in the Ardolf Science Center at The College of Saint Benedict.

The Science Center is named after Abbot Peter Engel, Saint John's fourth abbot, who was a notable scientist, astronomer, and photographer. Abbot Peter (1856-1921) fostered the construction of an observatory and photographic studio which were among the first in the State of Minnesota.  He also brought electricity to the campus.