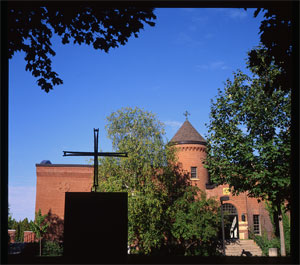 Guild Hall was the Prep School and University's first gymnasium and still serves as the Prep School's venue for varsity competition. It was designed by Charles Aldrich and constructed directly south of Simons Hall in 1901. In the 1930s when it proved to be too small, the building was moved on rollers one hundred and fifty feet to the west and a twenty-five addition was constructed, which had to be enlarged again by another thirty-two feet in 1949. A careful look will reveal the difference in brick on the exterior.

Its great maple floor is used for pick up games of basketball around the clock. Special dinners and other events are often hosted here.

The facility also houses the U.S. Post Office; the student newspaper, The Record; and the U.S. Army ROTC program.