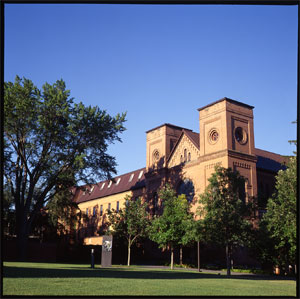 The Great Hall was the first Abbey Church on the Saint John's campus and now serves as a reception hall.  It anchors the main Quadrangle, which remains the hub of the campus and was constructed over a couple of decades beginning in 1868.  Until Benet Hall was built in 1921, the Quad served as home, church, classroom, and dining room for the monks of the monastery and the students in the prep school and college.

The upper floors are split between the monastery and the University.  The west half of the upper floors houses the humanities division of the University - including the departments of English, history, theology, philosophy, modern and classical languages, and the honors program.

The ground floor houses the main kitchen on campus with dining rooms for both the University and the monastery.  Students can also avail themselves at other dining venues on campuses of Saint John's and The College of Saint Benedict.

The bricks of the Quad were made from clay dug on Saint John's property.  An elder statesman on campus, the Quad celebrates its heritage with exposed bricks and timbers on the inside, even though every room is wired for voice/data/video and wireless technology.