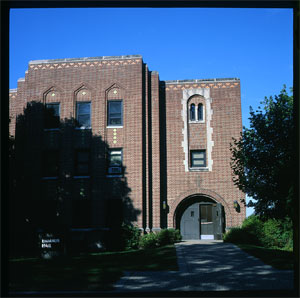 Designed by Jackson & Associates of Saint Cloud, Saint Cloud Hall was built as a major seminary by the Diocese of Saint Cloud in 1950.  Located on the south edge of campus near Lake Sagatagan, it was constructed on land leased to the diocese by Saint John's at a cost of $1 for 99 years.

The diocese relinguished the building in 1988. After renovation and upgrading, which included roofing, new windows, and improved wiring, it was renamed Emmaus Hall in 1994 and now offers a variety of private rooms, suites, and apartments for lay graduate students of theology and priests (lay and religious) on sabbatical.

Emmaus Hall has its own chapel (named Mary, Mother of the Redeemer), kitchen and dining room, and its own air conditioned classrooms.