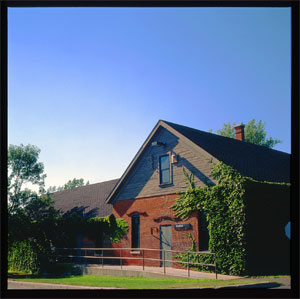 Constructed in 1878, just 22 years after the monks arrived at Collegeville, this structure was designed by Father Gregory Steil, O.S.B. Its first life was that of a Butcher Shop, preparing meats for the kitchen needs of a growing institution.

When the farm herd was abandoned in the late 50's, the building was cleaned up and became a "coffee house" in the mid-60s and later a campus pub - aptly named "The Butcher Shop." When the campus pub function was slated to be located in Sexton Commons, the building was turned over to electrical maintenance personnel.