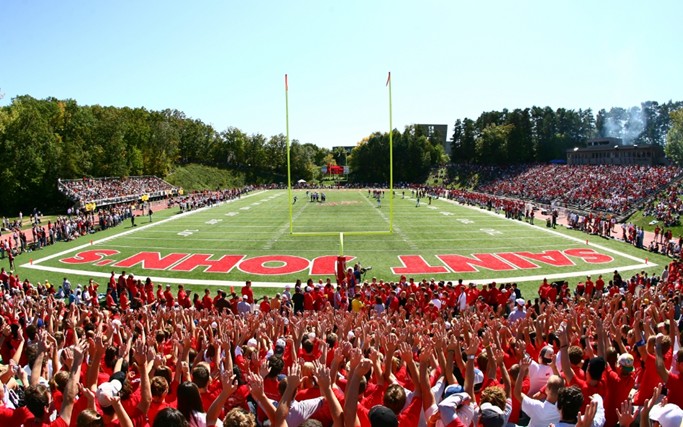 Dating back to 1908, when drainage of a cranberry marsh was completed in preparation for the new football field, Clemens Stadium has been home to many memorable events. Saint John’s has led the nation in Division III football attendance 12 of the last 13 years, including 2013. In fact, Saint John’s was listed by Sports Illustrated as one of the top 10 “Dream Destinations” in all of college football. What makes that fact even more impressive is that the other nine schools are Division I institutions.

Clemens Stadium is also home to the SJU track and field team and hosts a regulation sized, eight-lane, 400-meter track. The Johnnies have been a formidable opponent on the track as well as the field over the years with an average NCAA Division III Coaches’ Power Ranking within the top 10. The stadium has seen the Johnnies claim two Minnesota Intercollegiate Athletic Conference (MIAC) Outdoor Track and Field Championships (1999 and 2007). Since 1979, SJU has produced 56 All-Americans including four individual event national champions.

Clemens Stadium is also available to club sports, intramural sports, and the general student body during the academic year

Thank you for your patience and we look forward to having you all back safely! If you have questions please email [email protected] or ask the Fitness Center Staff.