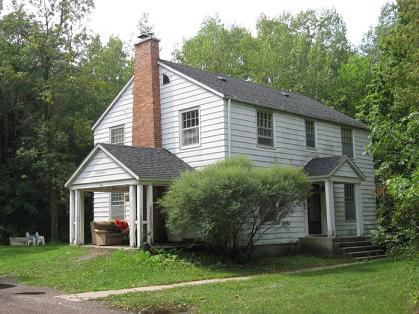 Edelbrock house was built on the north bank of Lake Watab in 1940. Initially, it served as the home for Isabelle and George Durenberger. George ’28 was a football coach and the athletic director of St. John’s University. Isabelle was executive assistant to university faculty members. Their son, David Durenberger ‘55, who was born and raised in Edelbrock house, became a United States Senator.

The house was named after Alexius Edelbrock, OSB. He was the second abbot of St. John’s from 1875 to 1889. In 1980, the house was moved to Fruit Farm road to make space for the earth shelters. Edelbrock house then became housing for upper-classmen. Over the years, it housed ROTC students, the rugby team, and, starting in 2010, it became an eco-house (a house for students dedicated to sustainability).

Edelbrock house was razed in the summer of 2014 due to the cost of repairs.