Black students became more of a presence on campuses across the country, and at CSB and SJU as well, in the late 1960s. Martin Luther King Jr. gave his "I Have Been to the Mountaintop" address on April 3rd, 1968, and was assassinated the next day.  Black Power and the Black Panthers were in the news.

In the fall of 1968, when there were about 25 blacks on the SJU campus, they founded the O.A.A.S., the Organization of Afro-American Students, to develop black unity and promote black culture in the community. (See Garvey, Terry, "Black Students Unify in OAAS, The Record, December 16, 1968, p. 7.)  A year later, their request for monetary support led to the establishment of the Black Student Culture Center.  By 1970, the civil rights movement was grabbing headlines (and advocates) across the country, and the number of blacks on the two campuses had increased to over 70. 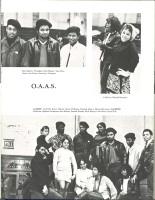 On November 11, 1970, a group of about 20-30 black students entered the office of SJU President Fr. Colman Barry to present "A Proposal Concerning Black Survival" (page one of which is pasted below) which laid out two demands: 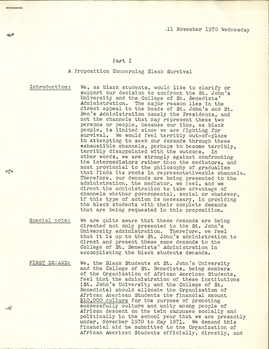 In those days, sit-ins were becoming a common way to attract attention to a cause.  Fr. Colman summoned his Administrative Council for a meeting.  On the morning of Monday, November 16, Fr. Colman (emphasizing that he spoke only on behalf of SJU, not CSB) relayed his Council's request for signatures on the petition and more specific information.  He also indicated his willingness to listen and to try to resolve the issue.

At 2:45 pm that afternoon, about 20 black students from St. John's and St. Ben's occupied the SJU President's Office.  SJU's legal counsel and the local police were summoned, attempts were made to persuade the students to leave, and, when nine refused, a legal injunction was read aloud.  After a half hour waiting period, nine students were arrested on contempt charges and spent the night in jail.

Click on the image below to read the news report on the incident as it appeared in the November 18, 1970 St. Cloud Daily Times: 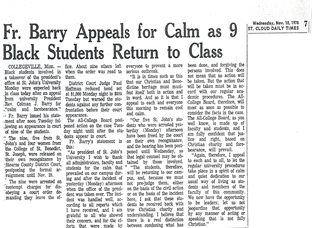 Ultimately, both presidents began efforts to raise funds--and to raise consciousness on campus of the needs of the minority students.

Letter to the Editor, The Record, December 4, 1970, p. 2, by Br. Louis [Blenkner], OSB.  [Other letters and the Editorial on this page are also relevant, as is the Column on page 3 by Jim Leisentritt.]

Compiled in June 2011 from resources in the SJU Archives, and other sources cited herein, by Peggy Landwehr Roske, CSB and SJU Archivist. All rights reserved.