Pottery and the Japanese Tea Ceremony 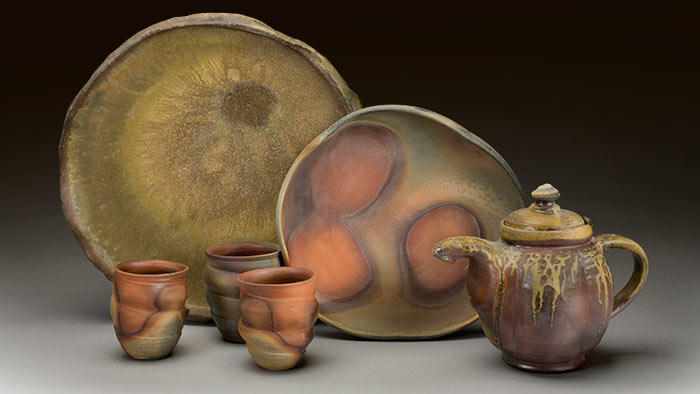 The Japanese tea ceremony was first developed in the 15th century by the tea master Sen No Rikyu. Initially, the chanoyu tea ceremony evolved its own aesthetic in contrast to the prevailing taste for opulence or extravagance and has since inspired many ceramicists to make pieces or utensils for use in the ritualised sharing of tea.

Over the years, potters have delighted in the qualities of naturalness, quietness, humility, and imperfection seen in historical tea utensils. As a Master Potter, Richard Bresnahan draws inspiration from many such pieces and enjoys the challenge of making his own work within the context of this remarkable tradition.

In the Japanese culture, teapots and drinking vessels related to the tea ceremony come in many shapes and sizes. The chawan or tea bowl is perhaps the most well-known outside of Japan, however, other forms such as yunomi tea cups and guinomi sake cups are also used in different types of situations.

Tea bowls are rinsed with hot water, which is then poured into a kensui waste water container. Handmade lids are made from a variety of natural materials such as wood or ivory. Tea is stored in the chaire tea caddy, a small ceramic container made specifically for storing matcha, or high quality powdered green tea.

Another form is the mizusashi water jar, a lidded container for fresh cold water used by the tea ceremony host. Sometimes, instead of a clay lid, a lacquered lid or lid made of another material is used. Bresnahan often includes special interior stamps at the bottom of these pieces, visible to the tea master through the clear water.

The hanaire flower vase holds special ikebana flower arrangements for the tea ceremony. Generally, there are three types found in Japanese tea ceremony rooms: one that sits upon a flat surface, another which hangs from a hook on the alcove post, and one suspended from the outer frame of the alcove.

Finally, cha-kaiseki and mukozuke light tea meal ceramics include various serving vessels as well as tebachi or kashibachi handled cake platters. Oftentimes, the handled serving platters are carried without using the handle itself, rather, the piece is held from either side and the handle functions to frame in the view of the special tea sweets within.