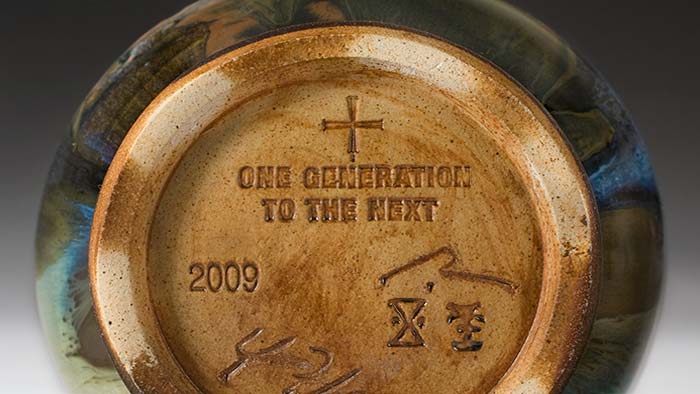 Within the tradition of Japanese ceramics, clay works are usually marked in some way so as to identify their place of origin as well as to denote the artist or artists involved in its creation. Long after the work is created, fired, and sold, these markings connect an object with a sense of place.

The Saint John's Pottery logo image (above, lower right corner) is based on the altar, baldachin, and cross featured in Marcel Breuer's architecture for the Saint John's Abbey Church. The logo stamp also resembles the irori tea table, kettle, and pot hook used to prepare tea for guests in the studio.

In addition to firing seals and commemorative stamps, Richard Bresnahan signs each work by hand with an uppercase R, the first initial of his given name. The single dot signifies that is the first generation potter in his family. Both markings assist future generations to identify or authenticate the ceramic piece.