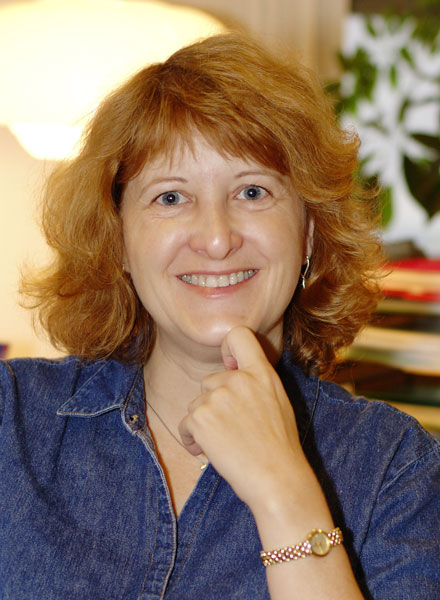 Computer science professor Noreen Herzfeld let her curiosity take her from mathematics and computer science into theology. She now teaches in both disciplines and her investigations led to the book "In Our Image: Artificial Intelligence and the Human Spirit." The path Herzfeld followed isn't typical, since it took her far beyond the boundaries of her department, but it makes sense once she explains it.

It all started with formal logic. "I think at that time, my interest in formal logic was precisely because it was formal. It was so neat. It was right or wrong," she says. Mathematics led to computer science and computer science took her in the direction of artificial intelligence. The shortcomings of formal logic began to show themselves. "The questions that started to interest me and engage my mind as I was teaching computer science," says Herzfeld, "were precisely the messy human questions that I had tried to avoid in the first place."The messiest question she encountered is not whether artificial intelligence CAN be done, but whether it should be done at all. Since no one was addressing that question, she spent her first sabbatical looking into it. "Very quickly, I learned that my background in the sciences left me woefully unprepared to deal with a question like that," she says, "because it wasn't really a scientific question. It was a question about human motivation. And I would have to deal with that question either philosophically, psychologically or theologically."She followed the theological inquiry and, naturally, took classes at CSB and SJU. The similarity between theological theories about humans being made in God's image and our interest in creating computers in our own image emerged quickly and became the basis of her book (and dissertation). She got her master's in theology and took a leave of absence to get her Ph.D. in Christian spirituality from the University of California, Berkeley.It's tempting, when talking to Herzfeld, to think of Joseph Campbell ... and Steve Jobs. Having a foot in both worlds has helped her make some very surprising and enlightened conclusions. For example, she points out that theology approaches the "being made in God's image" discussion three different ways: · substantive, meaning we share qualities with God · functional, meaning we do some of the same things that God does · relational, meaning we have a relationship with God and each other. Artificial intelligence, strangely enough, has tried all three approaches, in the same order, says Herzfeld. "As human beings, we stand in the middle looking in both directions," she comments, looking at both God and our computers.