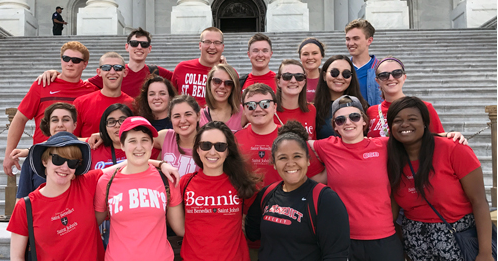 Twenty-two students from the College of Saint Benedict and Saint John's University are participating in summer internship experiences through the Washington, D.C., Summer Study Program from May 29 through mid-August.

This is the 38th year of the Summer Study Program, designed and operated by CSB/SJU faculty and staff in the political science department. This year’s group is the largest cohort in the program’s history.

The program provides students an opportunity to live and work in the Washington, D.C., area while earning academic credit. Each student serves in a congressional office, in a government agency, in a nonprofit organization or with a public affairs group, learning and working in a community. They apply for their internships based on their interests.

In addition to the work experience, this summer’s program co-directors, Philip Kronebusch and Matt Lindstrom, professors of political science at CSB and SJU, conduct seminars and arrange supplemental meetings with alumnae/i and other professionals to enhance the learning experience. The program is coordinated each year by Sheila Hellermann, department coordinator for political science, sociology and peace studies.

There are 15 students from CSB and seven from SJU in the program this year. While most the students are political science majors, other majors are represented, including economics, environmental studies, Hispanic studies, French, history, chemistry, English and philosophy.

The students, who are all rising seniors unless otherwise noted, are: