Sean Suter (SJU '10) is an international  economist in the Office of International Affairs at the U.S. Department of the Treasury. In May 2015, he graduated from the Master of Science in Foreign Service program at Georgetown University with a concentration in international development. During his time in graduate school he interned for the Inter-American Development Bank and at the U.S. State Department and worked as a teaching assistant for former Secretary of State Madeleine Albright. 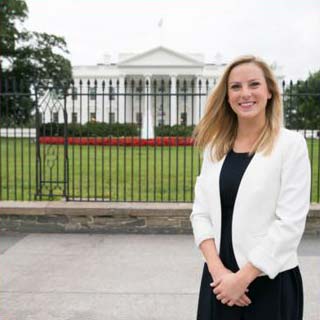 Bridget Cummings '15 participated in two internships over two summers in Washington. When she graduated from the College of Saint Benedict, she started working full-time at the White House in August.

Following her sophomore year at Saint Ben's, Cummings participated in the College of Saint Benedict and Saint John's University Summer Washington, D.C., Study Program, where she interned at the U.S. Department of Justice. What began as an internship for Cummings transformed into a post-graduation, full-time position as a staff assistant in the White House Office of Intergovernmental Affairs. She worked on the Intergovernmental Affairs (IGA) local team, engaging local elected officials from across the country. Currently, Cummings is the Manager for the Office of the President at the Obama Foundation.