I was an undergraduate English major who changed his major to philosophy before going to grad school. I have stayed pretty close to literature, occasionally teaching the Honors Great Books seminar as well as Philosophy in Literature and plenty of good novels and such when I do a First Year Seminar. And it goes without saying that I usually have my nose in a novel—although I’ve just said or written that, so it won’t go without saying. I tend to focus on Modern and Contemporary Continental European philosophy, anywhere from Kant, Hegel and Nietzsche to Heidegger, Levinas, Derrida and Foucault, though this is not an exclusive list. But I’ve also taught the Greeks—Plato and Aristotle—so you never know where I might turn up next. If it’s summer, I’m likely to turn up on the back roads of Stearns County on my road bike—an old Swiss Ochsner steel frame upgraded with Campy 10x2 components. I’m also likely to be found sojourning in El Salvador or Guatemala, doing solidarity work or leading a study abroad program. ( Sí, se habla español.) In fact, when I’m not teaching Continental philosophy or Great Books, I’m often involved in some question of social justice, both on the practical and the theoretical level. Additionally, I am a monk-faculty resident in Mary Hall, a freshman dorm at Saint John’s and I keep my culinary hand in practice with homemade pizza and sundry other dishes. 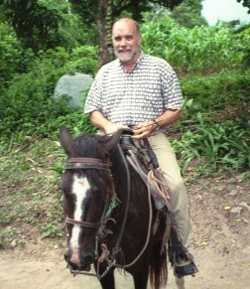