It took me a long time to figure it out, but the reason I enjoy studying philosophy is that it lets me live on very intimate terms with minds that are much smarter than mine. Great minds are full of surprises and challenges, and the more closely you look at them the harder they are to understand. I get exhausted, but great minds are truly inexhaustible. I also like contact with great minds of the past--dead white males--because seeing how differently they think from the way I think and everybody I know thinks teaches me more about the world we live in, how contingent and shaky it is, how different it could be. I've never been sure what century I belong in, although I'm sure it isn't the present. I'm either pre-modern or very post-modern. Through thinking with other minds, I can imagine alternatives to the way we live now. And I'm attracted to minds that are supposed to be scandalous. Aristotle poisoned the minds of western civilization for 2000 years. Machiavelli was used as a name for the devil, until he was replaced by Spinoza. Who's next?  Before coming to CSB/SJU, I worked for a year for National Endowment for the Humanities, giving away your hard-earned tax dollars.  Before that, I taught at Cal State San Bernardino, where I met my wife Jane, and before that at the University of Chicago.

I like being challenged and getting in over my head.  I've learned to swim so I could compete in triathlons.  In the spring of 2008 I biked from Cairo to Cape Town.  That ride made me feel that spending thirty years of my life trying to understand Aristotle was no longer the craziest thing I've ever done. 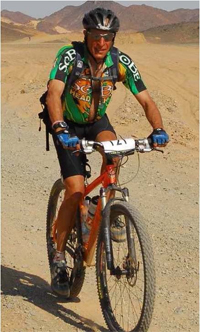