My spouse also has a Ph.D. in philosophy, and when we married, we knew that we’d be doing well to get one good job – meaning one tenure-track position – between the two of us. We decided from the beginning that we would not follow the dual academic career track where one of us found a job in one city (or state), and the other found another job in another city (or state), and we’d see each other on weekends and summers. Given the demand for women in philosophy, I knew that meant that I’d be following her to wherever it was she got the job. And so it was. She received an offer of a tenure track position from the College of St. Benedict in central Minnesota – where neither of us had ever dreamed we would find ourselves – and I accompanied her with Ph.D. in hand to seek my fortune, as I like to say.

My first job in St. Cloud, MN, was to go to work for Kelly Services – a temporary employment agency – where I was assigned to work at the Sartell paper mill as a secretary in the automated systems unit. Secretarial work was a pretty mellow, if low paid, start – the work requirements were undemanding, supervision was lax (so I could stretch my 30 minute lunch break to an hour without anybody noticing or caring), and it was interesting to chat with and watch the employees in the unit, especially when one of the big paper machines went down. They’d forget that I was even there in the scramble to get it up and running again. I was glad not to have their jobs, even if they did make five or ten times what I did at the time. So much stress.

I was able to leave Kelly Services when I started teaching classes as an adjunct instructor at St. Cloud State University. Adjunct instructors are hired by the course – it is temporary employment in higher education sector. It is generally regarded by faculty as a form of exploitation, and there’s truth in that – but when you have a Ph.D. and no other options, you’ll take what you can get. Besides, the pay scale here was three times higher than on Long Island, New York, where I’d come from. Better than what I got at Kelly Services, too, and the work was a lot more interesting.

I first taught distance learning sections of “Multicultural Philosophy” for SCSU, which was kind of cool – it was a bit like operating one’s own talk show with audiences at multiple remote sites as well as the in-house audience. It was an amusing challenge to facilitate a class discussion that might involve one student in Bemidji and another in St. Cloud. Through St. Cloud State I also taught summer courses at the St. Cloud prison – also known as “Greystone College”. It was possible for motivated and qualified prisoners there to earn an Associate’s Degree in something or other, and “Multicultural” and “Political” philosophy were two courses that satisfied requirements for their degrees. Truth be told, teaching them was a lot like teaching students in New York – they had a serious in-your-face attitude, engaged in a lot of rough & tumble verbal jousting with one another, and challenged me at every opportunity. It was one of the most interesting teaching experiences I’ve ever had. I’d like to do it again sometime.

The first course I taught at CSB/SJU was “Human Development” for the Education Department, also as an adjunct instructor. At a Christmas party to which my spouse and I had been invited I learned that the Education Department needed someone to teach the course and that the Chair of the department just happened to be at the party as well. Since two chapters of my dissertation had discussed some current issues in moral psychology, I was able to convince her that I’d be able to manage the course. So it was I got my foot in the door at CSB/SJU.

I think it was the same Spring, in 1997, when I taught for Education that I also applied for the position of Coordinator of Service Learning at CSB/SJU. Just as I knew when I married Jean that I’d most likely have to follow her to wherever she got a job, I also knew that I was the one who might have to undergo a change in career path. So I applied for this non-teaching position as a program coordinator. At least I’d still be working in higher education. Alas, I was their second choice. But at the meeting where I received this information I was also offered a consolation prize – two sections of First Year Symposium (now First Year Seminar). Now you have to understand, from my perspective at that time, this offer represented more or less full time employment. Two courses lasting a full year! So it was I got my foot a little further in the door.

I survived that year. FYS is a very tough course to teach well, and I had to learn on the fly. I made a lot of mistakes, and the students were pretty unforgiving. Fortunately, other opportunities still followed. The Philosophy Department needed a person to work as a sabbatical replacement. That is, while a couple of other tenured faculty members in the department got some time off, someone had to teach their classes. It was my great good fortune that the members of the Department thought that it would be a good idea to hire me for the job. It saved them the trouble of going through the hiring process, I was already there and knew the institutions, and I’d already taught FYS, which they wanted their replacement to do.

So this was full time teaching for a full year. Needless to say, I was eager to teach whatever the Department asked me to teach. If there was a course that nobody else was interested in teaching (FYS, Senior Seminar, Philosophy of Science) or if there were courses that others people were willing to give to me in favor of something else they preferred (Asian Philosophy, Political Philosophy, Environmental Ethics), then I taught it. I became something of an academic Jack of all trades. Not that I minded. I was halfway in the door. I’d gotten more opportunities already than I had any right to expect.

I taught two years, I think, as a sabbatical replacement. Then came the big opportunity. A long time member of the department, Raymond Pedrizetti OSB, retired from teaching. There was a tenure-track opening. The department faced a choice. Hire Chuck directly, or have a national search? They’d seen enough of me, evidently, to be comfortable hiring me on permanently. It helped a great deal, I think, that they also wanted to keep Jean. By hiring me, they could be certain of keeping Jean. And I didn’t look like too bad a deal. Now here’s the really sweet part – like the Lord above arranging things way in advance. Legally, CSB/SJU were required to conduct a national search to fill the position. However, it also happened that back in Spring 1996 I’d applied for the position that Jean had gotten. One of the strategies of new Ph.D.s going out on the job market is to apply for every position for which one looks even remotely qualified. So even though she was clearly more qualified for the position at CSB than I was, I sent my dossier anyway. Well, legal counsel for CSB/SJU ruled that since I had already participated in a prior national search that the Philosophy Department had conducted, they could hire me directly and remain in conformity with the letter of the law. And so it was done. The door was opened wide and I was invited in!

There’s more to the story, because I still had to earn tenure, but that will have to wait. Still, here’s one conclusion that I like to draw. At the beginning of this process, back in 1996-97, it looked like marrying another philosopher was a very bad career move. But four or five years later, it had become clear that – under the circumstances – it was probably the best career move I could have made. Her job got me here, and her job helped to keep me here. And now we’ve got on the velvet handcuffs – two Ph.D.s in philosophy, both tenured, in the same department at the same institutions of higher education. How likely is that? Downright miraculous, most everybody agrees. I owe a tremendous debt of gratitude to everybody who made it possible, ‘cause I couldn’t have made it happen by myself. 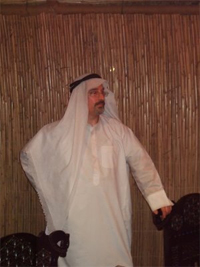