The Common loon (Gavia immer), Minnesota's state bird, dates back 60 million years and is one of the earth's oldest living bird species. Minnesota is home to more loons than any other state besides Alaska. Since 1993, volunteers at Saint John's have helped monitor Minnesota's loons by installing nesting platforms, and reporting nesting pairs, chick hatches, and chick survival rates to the Minnesota Department of Natural Resources.

2010 was an exciting year for Saint John's loons. Read a log of the season's loon observations and learn about the loon telemetry study done by the U.S. Geological Survey.

It is that time of year again, and Big John's transmitter is surprisingly still functioning, however it is unclear as to how long the transmission will last.

Because the battery and transmitter are not completely reliable, the US Geological Survey (USGS) is not putting Big John's signals on their web site this year. However, the USGS has agreed to send us updates on Big John's migration path back to Minnesota, as long as they are able to receive his transmission!

June 7, 2012: Sometime between May 22 and May 29 both of Big John's chicks went missing. Brother Walter Kieffer reported a lot of calling that week. Carol Jansky heard tremolos, and yodels late in the week of May 23. Big John and his mate were observed on East Gemini late that week. Br. Walter and Carol Jansky believe that either an eagle took the chicks, or that maybe they were injured during the hail storm that occurred on May 26.

May 16, 2012: Exciting news! Big John and his mate hatched two chicks within the last 24 hours! Big John had 'daddy-duty' this morning (with the chicks swimming on his back or close to him), as his mate went for some breakfast. This hatch is two weeks earlier than last year and the year before!

April 23, 2012: Carol Jansky reported to us that the loons are nesting on the north end!

March 29, 2012: Since Big John's transmitter is not completely reliable, we are trying to pinpoint  Big John's arrival to Sagatagan Lake.

March 16, 2012: Big John is a bit ahead of last year's schedule. He reported in from Ohio last week, and is the first of the radiomarked loons to have left the migration grounds!

The Lake Sagatagan male loon, "Big John" has spent the winter in the Gulf of Mexico. Track his spring migration as he heads north for the summer!

On July 12, 2010 Kevin Kenow, an ecologist with the US Geological Survey in Wisconsin, came to Saint John's with a team to capture loons, take measurements, collect blood samples, and surgically implant satellite transmitters. The purpose of the study is to be able to track the loons' migration patterns on a daily basis.

Where are they now? 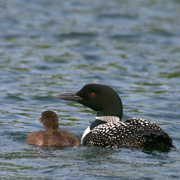