There are over 500 acres of surface water within the Abbey Arboretum, 200 of which are wetlands. Three of the most visible lakes are actually part of the North Fork of the Watab River, which begins upstream from Stumpf Lake, and has been dammed several times since the 1860s. Read more about individual lakes below. 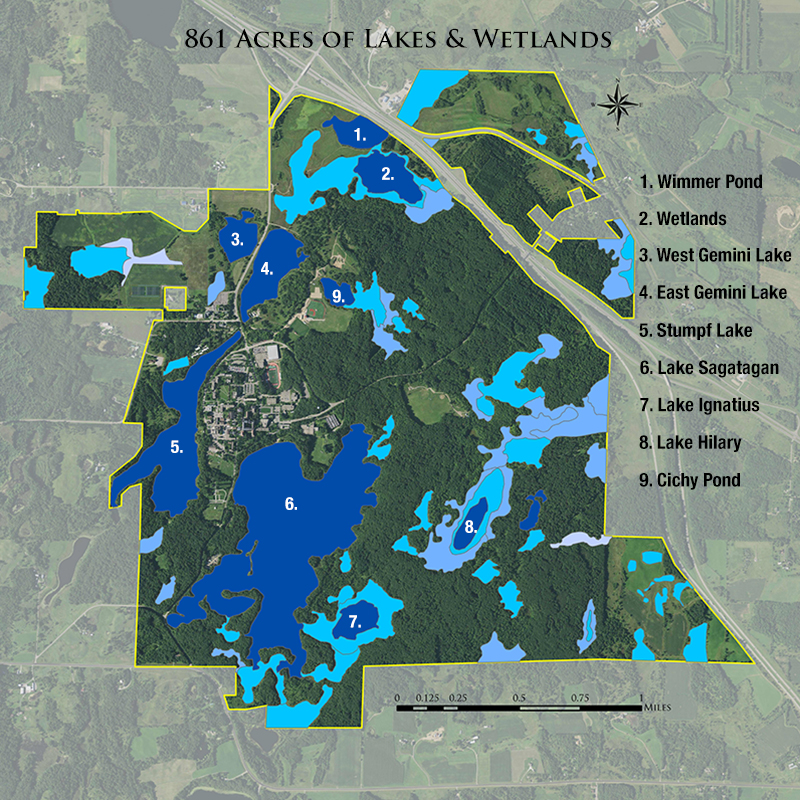 The surface area is 42 acres. These manmade wetlands were created as part of the Habitat Restoration Project by Fr. Paul Schwietz along with 150-acres of surrounding prairie and oak savanna in the late 1980s, following the original course of the Watab River which continues under I-94 towards the Mississippi River. The wetlands provide diverse wildlife habitat and allow for filtration of water. Water levels can be adjusted seasonally to attract wildlife – higher water in spring for waterfowl nesting and lower water in late summer to provide mud flats for seasonal bird migrations. Wimmer Pond is hydrologically connected to the wetlands.

The surface area of West Gemini Lake is 12 acres. It was originally a wetland prior to damming of the Watab River. Steinbach (German for stony brook) creek originates in undeveloped, forested wetlands less than a mile west of West Gemini. The Gemini lakes are connected by an equalizer pipe under County Rd. 159.

The surface area is 37 acres with a maximum depth of 11 feet and a mean depth of 5.5 feet. East Gemini is a manmade lake that was created as a settling pond for phosphorus being released from the wastewater treatment plant. The Gemini lakes were named in the 1960s when the United Sates was conducting the Gemini manned space flights. The oak savanna surrounding the eastern half of the lake was former pasture land for the abbey and university’s cowherd.

The surface area is 68 acres with a maximum depth of 36 feet and a mean depth of 10 feet. The name Stumpf (German for stump) was given after exposed tree stumps remained in the newly created lake behind the dam that was constructed in 1868 for a saw mill and flour (grist) mill. A culvert at the previous dam site allows water to flow to East Gemini Lake.

The surface area is 176 acres with a maximum depth of 40-42 feet and a mean depth of 9 feet. Lake Sagatagan is a natural kettle or pothole lake with no direct water inputs or outputs, which is uncommon for Minnesota lakes. The lake is recharged by underground springs, rain and snow from the surrounding land. The lake along with the fine timber surrounding it was the major draw for Fr. Bruno Reiss and the early settler monks. The lake was originally called Lake Saint Louis after King Louis (Ludwig) of Bavaria, an early benefactor of the Benedictines. The name was later changed to Sagatagan, an Ojibwe word meaning punk or fungus outgrowth on trees used for tinder, from its reference in an 1896 poem by Alexius Hoffman, OSB. Lake Ignatius is hydrologically part of Lake Sagatagan with a channel connecting the two.

Lake Hilary is tucked deep into the woods and was once a swamp with far less open water. The monks dammed the outlet of the swamp, initially as a way to maintain the trail. The small dam raised the water level to about 5 feet at the deepest point, but the dam eroded over time, slowly lowering the level of the lake. Lake Hilary doesn’t have any fish, but does have minnows that survive the ice that freezes to the bottom in many areas of the lake.